A successful duet often resonates a chemistry or connection between partners. A non-verbal communication of some kind occurs. Such interaction, particularly in contact improvisation, often involves pressure, resistance, a sharing of momentum and/or weight, and a common awareness of time and space. The experience of partnering can be very similar when dancing with your camera!

Whether a shot calls for a subtle shift in direction, a gradual spiral across the horizontal plane, or a vigorous traveling sequence across the fields of Bennington, the videographer must be aware of how they are executing shifts of weight.

The nuance of dropping the weight of the pelvis and controlling the musculature of the legs during locomotion can be sensed in the resulting footage. Particularly in freeform techniques, it is essential to “grain” toward the camera as the dominating gesture of the dancing body. Moving with a sense of totality when shooting will lead to a recognizably organic quality in the resulting footage. Even when using a tripod, camera motion can be drastically improved if one thinks of the movements of the camera as inspired by engaged performance behind the camera, and not from simply manipulating the tripod arm with a single, isolated grip. Perhaps we should begin all video shoots with a series of undercurves and overcurves! If shooting from a seated position, benches or rotating stools are recommended. These promote the ability to slide side to side or rotate freely as needed. Make an effort to situate yourself within an ergonomically correct workspace, especially during lengthy shoots, but keep in mind that the most comfortable angles are often the most boring. Extended shoots and awkward positions create an excellent opportunity to apply all that we know about relaxation techniques and stretching!

Another great way of transferring energy from the living body into the recorded medium of video is through the use of breath. As dancers we here this term on a regular basis, but what does it actually mean and how can it translate into the art of videography? Connecting breath to movement typically means coordinating inhalation and exhalation with the actions of a movement phrase. An inhalation results in a number of physical changes within the body that are sensed with the body’s proprioceptors. The torso expands spatially and approaches a state of lightness as the incoming air alters the density of the body. The opposite occurs on the exhalation. Both the inhalation and exhalation may be elongated, resulting in a controlled, sustained drawing in of energy, or releasing of energy outward. A rising and descending quality is often associated with breath, particularly as a result of the elevation and depression of the shoulders that may be noted when breathing is centered in the chest, versus abdominal breathing. This spatial rising and falling, in conjunction with the temporal quality of a breath which includes an anticipatory pause between inhale and exhale, has resulted in an association with the quality of suspension. This kinetic sensation typically follows a similar framework involving an upward motion that slows to a perceived pause and then accelerates in a downward direction.

A slow breath seems to have no distinct beginning or ending. This may be paralleled to a gradual crescendo and decrescendo in music. Movement may also have a similar quality when it lacks initiation or impulse. By linking a sense of resistance and breath with a sensitized weight-shift, one may perform a gradual, controlled movement with the camera. Who needs expensive, high-tech toys to accomplish smooth motion, when you embody a mastery of sustainment and muscular control! Release the knees and breathe!

In music, the term “breath release” is used to signify the ending of a note that is not articulated abruptly, but allowed to dissipate due to the discontinuance of airflow. A similar performance quality may be applied when releasing the grip on the camera/tripod. By sensitively pulling away from the bi-directional resistance needed to execute smooth motion one may eliminate the jarring shifts that are often observed as the hands are removed at the end of a camera movement. Not to say that all panning and tilting actions must be executed smoothly, but developing the ability to decelerate into a desired frame and gently move the hands away from a recording camera is a great investment in developing your artistry as a videographer.

The human body is capable of an infinite range of qualitative dynamics, all of which may be channeled from the mind/body/spirit of the videographer to the experience of the audience viewing the footage on screen. This process is dependent on there being an underlying motional intent driving the performer behind the camera. Rudolf von Laban’s Weight, Time, Space, Flow categories may be used to define the components of any movement. Perhaps easier for to identify by movement analysts watching the dancing body, Laban’s method of classifying effort is also applicable to camera motion. Anyone looking for a thesis or dissertation topic? 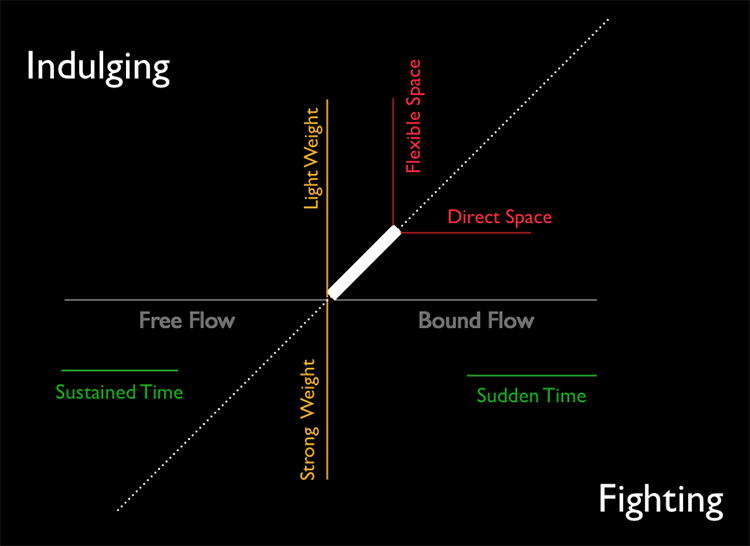 “In my view, dance film is a merging of the principles of dance and film, not just the shift of dance onto film. As a dancer and now a dance filmmaker, my favorite part about dance is not watching it, either on stage or on screen, not talking about it, not even filming it, but doing it. Yet when I shoot dance, I often feel the way I do when I am dancing. Essentially, I have transposed the experience of kinesthetically moving through space into dancing with my camera. I could be shooting hours of footage for a documentary, but I could still tell you the five or six shots that are magical, where I am in synch with the dancer and the movement: I often get shivers up my spine.”

From “Dancing with the Camera: The Dance Cinematographer” by Evann E. Siebens inside Envisioning Dance on Film and Video